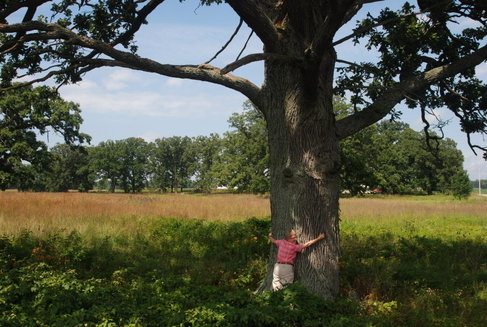 We were ecstatic in December of 2010 when ODNR, using private donations from the DNAP Income Tax Check-off Program, successfully purchased Daughmer Prairie Savannah located in Crawford County. Efforts to permanently protect this bur oak prairie savanna date back to the 1960s when the site was first reported by W. L. Muhlbach, a botanist from Crawford County.  It was included in The Natural Areas Project, A Summary of Data to Date, Dr. J. Arthur Herrick’s 1974 inventory of the best known natural areas remaining in Ohio. Many of the sites listed in Herrick’s publication have since been destroyed, but Daughmer, one of the very finest, has at last been protected after many years of effort by The Nature Conservancy, The Ohio Biological Survey, the Crawford County Park District, and ODNR’s Division of Natural Areas & Preserves.

I had visited the savanna many times when it was owned by Frank and Hazel Daughmer, who used it to pasture sheep. By the time it was purchased by ODNR, the sheep had been removed for several years. In the absence of grazing, many non-native plant species introduced to the site by sheep, but no longer kept in check by grazing, were quickly becoming a problem.

Upon pulling into the parking lot for my first visit to the preserve following its acquisition, I was dismayed to find extensive stands of the very invasive common teasel (Dipsacus fullonum). Not only was this non-native in full flower, but many flower heads were just waiting to disperse hundreds of thousands of additional seeds. Between 1997 and 2002 when OSU graduate student John Mack was inventorying the plant species present at Daughmer for his Master of Science thesis, he did not encounter any teasel. It is essentially a biennial that develops a winter rosette. When sheep were put on pasture in the spring, these rosettes would have been among the first greens grazed, thus keeping the plants under control. Only tiny seedlings originating from sheep dung would have been present and out of sight.  When the sheep were removed, those seedlings were able to reach full size, competing with native prairie species for nutrients and space. It was clear on that visit in June of 2011 that something had to be done soon before these plants once again dispersed their seeds making the problem even worse.

Although ONAPA was just coming together as an organization, we put out a call for volunteers to help bring teasel under control at Daughmer, and about 20 people turned out. Since the seed heads were already developed, the volunteers had to cut off the heads and bag them so they could be removed from the preserve.  By the end of a very long day, 30 large leaf bags were filled with seed heads. The following year, volunteers from Columbus Audubon joined the effort.

This time we were able to get a start before the seed heads were fully developed, which allowed volunteers to simply cut and pull plants out of the ground and then remove the undeveloped seed heads. This past summer, volunteers from Columbus Audubon, Mohican Native Plant Society, and Crawford County Parks joined ONAPA volunteers to bring teasel under control. Significant progress is being made but it will take several more years to eradicate teasel since there is a seed bank remaining in the soil and thousands of teasel rosettes still present.

While cutting teasel, one individual asked why not just burn the savanna in spring and spray the teasel rosettes with herbicide. There are two problems with that. First, fire does not negatively impact teasel seedlings or rosettes. It would, however, expose the rosettes so they could be more easily sprayed with herbicide, and that brings us to the second concern. Although herbicides have their place and may be the only effective method for dealing with some invasive species, they should be the last resort for use in a nature preserve and even then, used judiciously. Daughmer Prairie Savanna has never been plowed or had chemicals applied, which means that its soil microorganisms are still intact. Science has recently learned just how important soil microorganisms are to plant growth and health. Therefore, we need to protect them from chemical applications. The day may come when microorganism like those found at Daughmer will be critical for inoculating agricultural fields to increase crop yields. It would be totally irresponsible to compromise those soil microorganisms by the use of herbicides simply to more-easily control an invasive species that can be—and is being—brought under control manually.

In addition to efforts needed to eradicate invasive species, there are other serious challenges to be addressed at Daughmer. Being situated well east of the typical range for prairies, prescribed fire needs to be employed on a regular basis to control invading woody species and keep them from crowding out the shade intolerant prairie plants. In Ohio where we average more than 40 inches of annual precipitation, prescribed fires need to be done more often than in western prairie states like Illinois and Iowa. But prescribed burns also pose a problem.  Most of the trees at Daughmer are over 200 years old. Livestock grazing has prevented the growth of young bur oaks to replace parent trees as they succumb to old age and storm damage.  Now that grazing has ceased, young bur oaks are once again becoming established. The problem is, too many seedlings can change the savanna into an open woodlot. Fire will top kill young bur oaks until they reach about 12 years of age. For replacement of the old trees to occur without the savanna turning into a woodlot, some, but not all, of these young trees need to be initially protected from fire as well as from buck deer girdling them by rubbing the velvet off their antlers. Here, too, ONAPA volunteers have stepped in by putting deer protectors around several young bur oaks and by mowing down vegetation around the trees so prescribed burns will not kill them. These are just some of the many challenges facing preserve managers who are charged with managing our state nature preserves in a sustainable and responsible manner for the benefit of this as well as future Ohio generations. It is a huge job that preserve managers cannot do alone. That is why ONAPA is dedicated to recruiting and organizing volunteers to assist them.  If you would like to participate in this very meaningful effort, email us at info@onaopa.org.