ONAPA Partners with OIPC on Small Grants Program
Early in 2015, we learned at the Ohio Invaive Plants Council’s (OIPC) Annual Meeting that OIPC has had an ongoing small grants program in place since 2013 to fund college students who conduct relevant research on invasive plants in Ohio. They have a great program in place with outreach to major Ohio colleges and universities, as well as an excellent grant proposal review panel composed of biology professors and land managers. However, OIPC has limited funds and could only allocate $1,000 each year for their grants program. ONAPA had the funding, but no program structure; OIPC had the program structure, but only enough funding for 1 or 2 projects annually. Invasive plants are a major threat to our nature preserves and are therefore a major focus for ONAPA

Accordingly, the presidents of both the ONAPA and OIPC boards discussed the possibility of joining forces to better address the problem of understanding and controlling invasive plants in Ohio. Both agreed it would be an excellent move. At the February 27, 2015 ONAPA Board Meeting, a motion was passed unanimously to approve using the $3,000 in the small grants program for this partnership with OIPC to sup-port research on invasive plants in 2015. Dr. Raymond Heithaus, Chair of the ONAPA Scientific Advisory Committee, is coordinating this new joint small grants program with Dr. Jean Burns from Case Western Reserve University, coordinator of OIPC’s small grants program. Proposals must be submitted to OIPC by November 1st. In addition to ONAPA, the Cincinnati Wildflower Preservation Society is contributing $1,000 to OIPC this year for the program, giving a total of $5,000 available to college students and others with important research projects on invasive plants. Interested parties can obtain more information on the OIPC website at www.oipc.info. 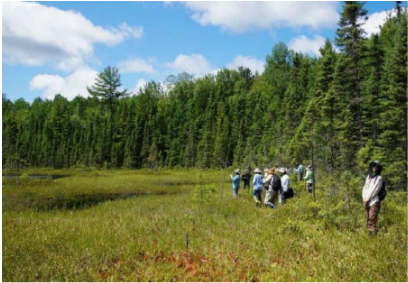 Member Michigan Trip
In July, ONAPA conducted its very first several day-long out-of-state field trip. Our adventure took 20 intrepid participants north to explore the peatlands, bogs and fens, of Hiawatha National Forest within the Upper Peninsula of Michigan. Bogs and fens are very rare and special ecosystems in Ohio where they occur as living relicts of the last Ice Age. Many are designated state nature preserves. In northern Michigan, we are far enough north that they are a fairly common component of the Boreal Forest landscape. Here we can explore them in order to get a better understanding of and appreciation for the few remaining ones we have in Ohio.

In addition to exploring the peatlands within Hiawatha National Forest, we also visited Pictured Rocks National Lakeshore along Lake Superior and Seney National Wildlife Refuge. Allison Cusick, retired Chief Botanist for DNAP and now a resident of Pittsburgh, came along as a participant, but actually help lead the trip. 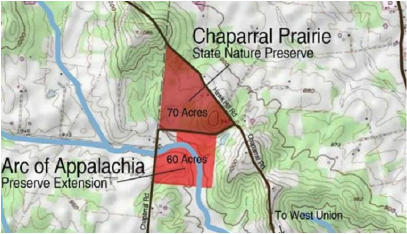 Chaparral Prairie State Nature Preserve Extension
The ONAPA Board of Directors approved a $3000 grant to help the Arc of Appalachia acquire a 60 acre addition to Chaparral Prairie State Nature Preserve in Adams County. This project was a collabo-ration with ODNR’s Natural Areas and Preserves program which pledged 25% toward the acquisition cost and agreed to accept management of the new tract. The Arc also received a Clean Ohio Grant to aid in the purchase. Our association’s funds help fill the gap in monies needed to complete the purchase which was closed on January 22, 2015.

Chaparral Prairie State Nature Preserve is home to 2 Endangered, 5 Threatened, and 6 Potentially Threatened species, most no-tably the largest population of Rattlesnake-master (Eryngium yuccifolium) in the state. Plan to visit this new addition on August 1, 2015 when the Arc of Appala-chia is having its celebration of this new addition. You will be treated to a prairie filled with Rose-pink Gentian, Partridge-pea, Black-eyed Susan, and thousands of wands of Dense Blazing-star. The cere-mony is planned for 10:00 A.M. with hikes following led by some of Ohio’s finest naturalists. Come and enjoy this celebration! 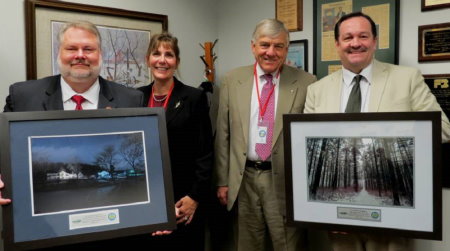 State Representative Mark Romanchuck, Cheryl Harner, Guy Denny, and State Representative David Hall.
Legislative Outreach
In Septemberof 2015, ONAPA held its very first legislative reception to acquaint and familiarize Ohio legislators with ONAPA and the work we do. The event was held in Columbus and had a very good turnout. We were especially pleased that Senate President Keith Faber, Senate Majority Whip Larry Obhof, and senators Bob Patterson, and Frank LaRose were among those in attendance. The event was cohosted by former ODNR directors Joe Sommer and Fran Buchholzer who are also members of ONAPA.