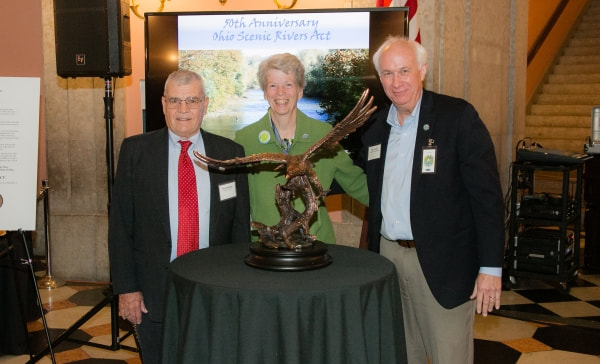 Dick Moseley, former First Lady, Hope Taft, and Eric Partee
On February 28, 1968, Ohio became a pioneer in river preservation with the passage of the Scenic Rivers Act, the nation’s first scenic rivers law and seven months prior to the passage of the National Wild and Scenic Rivers Act by Congress.  In recognition of the 50th Anniversary of the Ohio Scenic Rivers Act, the Ohio Chapter of the Nature Conservancy and the Little Miami Conservancy, along with numerous other conservation organizations, including ONAPA, sponsored a special state legislative reception this past February 28th in the Statehouse Rotunda.

At the conclusion of this very special event, Richard E. Moseley, Jr. retired ODNR administrator and currently ONAPA’s Secretary was awarded the very prestigious Glenn Thompson award for Dick’s pioneering efforts in developing the Ohio’s Scenic Rivers Program as the first administrator of the program. The late Glenn Thompson, publisher of the Dayton Journal Herald, was a major force behind the passage of the state’s as well as federal scenic river laws. Presenting the award to Dick Moseley were former First Lady Hope Taft and Eric Partee, Executive Director of the Little Miami Conservancy.