Lakeside daisy population gets a helping hand from ONAPA, DNAP and USFWS
On Tuesday, October 15, 19 people from ONAPA, USFWS, and DNAP worked together to transplant over 400 Lakeside daisy plants from the active Lafarge Quarry in Marblehead to the new preserve addition. This effort continues an annual recovery program to salvage plants from the quarry and establish new populations on protected, public lands. In the past, plants were moved to Kelleys Island State Park. Plants are carefully dug from areas in the quarry slated for blasting, moved and planted in appropriate habitat, and watered. The hope is these plants will become established, flower and produce seed, and increase genetic diversity in the existing population. 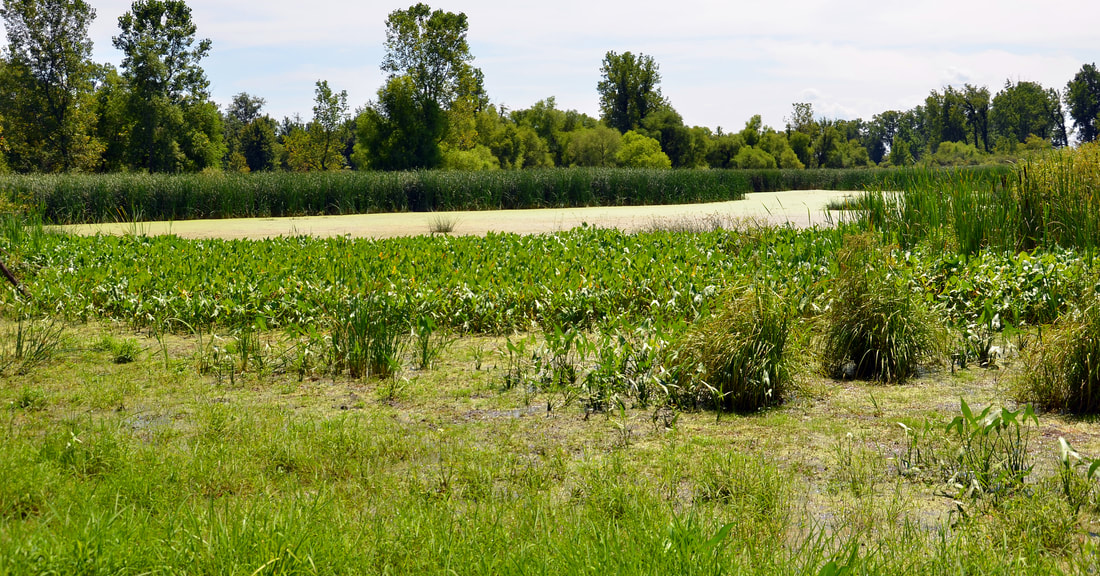 Cedar Bog's meadow habitat gets some help from ONAPA volunteers

On Wednesday, July 10, 12 ONAPA volunteers worked with preserve manager, Mike Crackel from Ohio History Connection, to remove woody species in two different areas at Cedar Bog.  Cedar Bog, which is actually an alkaline fen, needs open meadow habitat to maintain the many rare species of plants and animals it harbors.  Volunteers worked near the visitor center to begin to re-open a meadow which is currently tall dogwoods and willows.  They also worked in one of the fen meadows along the boardwalk to remove woody species, including invading tulip trees and white cedars.  ONAPA is happy to partner with OHC to help manage these important habitats.

Woody invasive plants at Medway Prairie Fringed Orchid Site no match for the volunteers March 21.
Recent stewardship projects include March 21 at the Medway Prairie Fringed Orchid Site and April 11th at Rhododendron Cove SNP.  Eight (8) ONAPA volunteers, 3 USFWS staff, and 1 DNAP staff worked at the PFO site in Medway to remove woody species to improve habitat for the rare orchid.  At Rhododendron Cove SNP, 10 ONAPA volunteers and 2 DNAP staff pulled garlic mustard to restore habitat for spring wildflowers.  It was a great start to the 2019 season!  Garlic mustard was much less abundant than previous years, but there was still plenty to remove.

For a description of upcoming volunteer opportunities, go HERE. And here is a complete list of 2019 Stewardship Projects.

ONAPA has been busy this winter with several winter stewardship projects.  Unfortunately the weather has not always cooperated, so we had to postpone or cancel a few projects.  We have been getting some important work accomplished at a number of preserves and other natural areas.  We did more hemlock woolly adelgid surveys at Crane Hollow (February 26) and Little Rocky Hollow (March 6), fortunately not finding any HWA at either site.  We worked at a couple of sites for Eastern prairie fringed orchid, improving habitat by removing woody species - Killbuck Marsh Wildlife Area (February 28) and Mallard Club Wildlife Area (March 12).  We also removed bush honeysuckle and other woody invasives in the woods at Mentor Marsh (March 7th) in cooperation with the Cleveland Museum of Natural History.  While our volunteer groups have been small this winter, we have accomplished good work at each project.

The weather has been challenging so far this year, causing us to cancel (and reschedule) 3 stewardship projects already.  We did work at Brinkhaven Barrens on January 15 on a cold day.  Three of us worked to remove a thicket of brush and dead woody stems in the south barrens.  We built a large brush pile and burned the cut material which helped keep us warm.  On February 19th, 8 volunteers and preserve manager, Josh Deemer surveyed a new area at Lake Katharine for hemlock woolly adelgid (HWA).  It was an area not far from the known infestation and we found more HWA.  These surveys help the preserve manager document the extent of the infestation and determine what treatments will be used to control their spread.  Fortunately what we found was a relatively light infestation.